I’ll never stop loving nude makeup. As years go by, the more firmly I believe that “less is more” when it comes to my makeup. Sometimes I’ll use a darker eyeshadow, but always in different shades of brown. It’s been a year since I last used eyeliner.

I prefer to play with the skin’s glow and sheen, as well as blush – and when I get inspired, go crazy with a lipstick. But bright eyeshadows no longer feel like me. I do love to create looks with all colors of the rainbow – just not for myself. That’s why I like to do my makeup experiments on someone else’s face – which we did with Mikko for Zuii’s spring looks. In my younger years I worked for a professional makeup line. Back then I would wear tourquoise, bright green or orange eyeshadow on a daily basis. For a long time, glitter eyeliner was my absolute favorite. Oh, those were the days! Too bad I didn’t document those looks, it would be a lot of fun to look back on them now. During summer, my makeup gets even barer, when it comes to both foundation and eyeshadows. I’ve been using Absolution La Crème du Teint in Light ever since I got one to test out. I put on a very light layer, and after that I cover my dark circles with Kjaer Weis Foundation, because it’s thick enough to be used as a concealer. I have the foundation in two shades. The lighter one, Silken, is yellow and it’s great for covering up blemishes and adding light under your eyes. Just Sheer is a warmer tone which is good for neutralizing the blue under the eyes. Kjaer Weis recently made new additions to their lovely range of makeup and I immediately made my way to Jolie to shop for new eyeshadows. I got Grace, a new shade which is perfect for a nude look and goes well with my trusted favorite, Charmed. Nowadays I always use RMS Beauty Lunar Eye Polish as an eyeshadow primer. Using a finger tip, I dab a tiny amount on my lid. After that I pat and brush Charmed on the entire eyelid and the lower lash line. I use Grace for blending. I also brush it along the lower lash line to create just the right amount of intensity – you won’t really notice it, but at the same time it really brings out your eyes. Sometimes I’ll brush a little bit of Cloud Nine on my brow bones. This is the perfect shade for highlighting under the eyebrows, as it’s not too shiny and the tint is slightly golden, creating a softer effect. Then I’ll just curl my eyelashes and add a couple of layers of the world’s best mascara by Kjaer Weis. When it comes to adding glow to the skin, RMS Beauty Living Luminizer is unbeatable, simply the perfect amount of glow. I also love Kjaer Weis Radiance Highlighter, but it creates a more glowing disco ball effect – Living Luminizer is more versatile. I dab it on my brow bones, above my cheekbones, on the bridge of my nose and right above my upper lip. After this I dab a creamy blush on my cheeks. In these pictures I’m wearing Sun Touched by Kjaer Weis. After that I dab some Living Luminizer on top of the blush and follow that with another, very light layer of blush. This gives a natural, sublte glow to the cheeks. To hold my foundation in place, I use a light layer of RMS Beauty Tinted Unpowder – the silkiest loose powder in the universe. I have so many different favorite lipsticks. Currently I’m stuck on Kjaer Weiss Lip Tint in Sweetness, but my favorite shade might be something completely different come next week. The same goes for blushes – I like to switch them up, if not every day, at least every week.

Once we finally get a heat wave and my skin gets a bit more tan, I’ll have to get myself the new Dazzling Bronzer by Kjaer Weis. It’s a warm, bronze version of the Radiance Highlighter, but for contouring it’s too shiny and light. I think the best bronzer that’s also suitable for contouring is RMS Beauty Buriti Bronzer, both for its shade and the amount of glow it gives.

I took a couple of pictures of my updated nude look while wearing my wet hair under a turban (you’ll hear more about this concept later). As I was examining my skin I noticed that my pores have gotten remarkably smaller during the last year. Also, my blackheads have almost completely disappeared during the last couple of months! I can’t think of any other reason for this besides the fact that I’ve switched to cleansing oils and balms. The sequel to my post about facial cleansing will be all about my favorite cleansing products – I’ll start working on that as soon as possible!

What do you think of this nude look? Please let me know your favorite nude makeup products and tips! 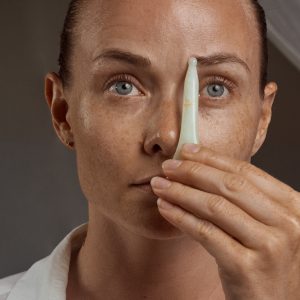